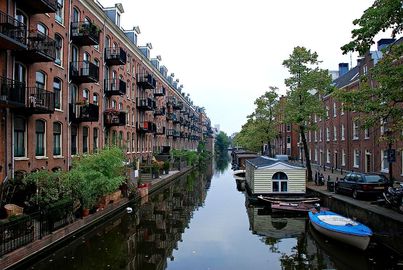 Among Amsterdam's 165 canals, the Brouwersgracht, which whisks the visitor from the touristy city center towards the residential historic Jordaan, may arguably be considered the most charming. With its iron humpback bridges and picturesque houseboats, lush greenery and stately traditional warehouses with colorful shutters lining the banks, Brouwersgracht is without doubt particularly attractive. Brouwersgracht heads westward if you are approaching from the Centraal Station and it borders the Grachtengordel (the so-called Canal Girdle - the canal ring that surrounds the city, consisting of the Singel, Keizersgracht and Prinsengracht canals) to the north. Its construction commenced in 1614. Literally translated, Brouwersgracht means the Brewers' Canal. This name sprung from the many breweries that lined the canal's banks in the 17th and 18th centuries. These days, most of the breweries, fisheries, tanneries and warehouses have been converted into high-end modern lofts. As you stroll along the Brouwersgracht, atop the houses you may notice various gables featuring the ubiquitous hoisting beam, still in use today whenever the residents have to move furniture in and out of the houses. Particularly noteworthy for their trapezium gables are numbers 204-212. Also, look out for plaques that describe the original owners' occupations. These came in handy for deliveries before the time house numbering was introduced. For example at number 162, there are two dried fish above the door, denoting the former fishery. Later on it was the stone gables that announced the owners' occupation. The points where Brouwersgracht connects to the Singel, Herengracht, Keizergracht and the Prinsengracht offer perfect photo-op views down the grand canals. Sit down on a bench along the canal and have a snack or a quiet moment watching boats, bikers, and birds pass by.