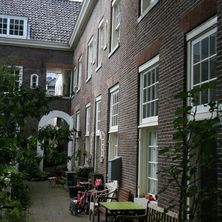 Located at Karthuizersstraat 89-171, the Karthuizer Cortyard is the biggest of Jordaan's courtyards, originally built to house elderly widows. Erected in 1650 on the site of a former Carthusian monastery, it has two levels with a total of 104 rooms. Plans for the courtyard were drafted by the architect Daniel Stalpaert. Above the entrance to the courtyard are carved the names of the first regents. Inside the courtyard, two seventeenth-century water pumps with bronze taps in the form of a fish and a mascaron stand to this day. Inside the courtyard, above the entrance is a relief of an Amsterdam cargo ship. At the time this was the largest commercial vehicle worldwide, an equivalent to, for example, jumbo airplanes today. In 1973 the last of the elderly left the housing, which is now occupied by regular residents.