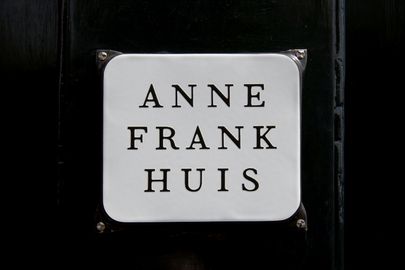 Most of the world has heard about Anne Frank, the Jewish-German girl, whose family led a clandestine existence in a secret annex of an Amsterdam canal house during the Nazi occupation. These days the Diaries of Anne Frank are widely read by school-kids worldwide, endowing them with a personal understanding of Fascism and the Holocaust from the point of view of a teenager like themselves. Simon Wiesenthal, the famous Nazi hunter, expressed a similar sentiment when he said that the diary had raised more widespread awareness of the Holocaust than had been achieved during the Nuremberg Trials, because "... people identified with the child. This was the impact of the Holocaust, this was a family like my family, like your family and so you could understand this."
Otto and Edith Frank lived in Frankfurt, were married there in the early 1920s and had two daughters, Margot, born in 1926, and Anne, born in 1929. They led a relatively worry free life until the tumultuous era of German economic instability propelled Hitler's NSDAP into power. In 1933, Hitler took over as the head of the German government. The Jewish Franks were increasingly concerned for their well-being. They looked for means of escape, and in the late 1930s they decided to leave Germany and settle in the Netherlands. First Otto Frank set up his own business in Amsterdam, then Edith, Margot and Anne followed him to the Dutch capital. After the move, the Franks felt safe and free again. The children went to school, Otto worked hard to keep his business profitable and Edith took care of the household. The peace, however, did not last long.
On May 10, 1940, German troops invaded the Netherlands. In the occupied Amsterdam, restrictions for Jews and their businesses were quickly imposed. The Franks tried to emigrate to the United States but their efforts failed. It soon became clear that the only way for the family to survive was to go into hiding. Otto's business premises on the Prinsengracht canal seemed like a viable place and preparations were hastily made.
Margot was the first one to be called up by the authorities to be sent to a German labour camp. At that point Otto and Edith decided that the danger had become too great and the family hid in the secret annex of the house. Together with the Franks, four other Jews took refuge in the house: Hermann and Auguste van Pels, their son Peter and Fritz Pfeffer. Otto's four employees helped them during these years. The fear of being discovered gloomily dominated everyone's existence. Crammed into the tight clandestine quarters, doubtless the eight hiders found the living conditions excruciating.
While in the secret attic, Anne kept a diary, wrote short stories and copied sentences written by other authors into her book. She intended her diary to be re-worked into a novel, to be published after the war and even started editing it. However, before she could finish her work, someone betrayed the Franks and the four other inhabitants and tipped off the Nazis, who arrested everyone on August 4th, 1944. First they were deported to the Westerbork transit camp, then sent on to the death camps. Hermann van Pels was murdered in the gas chambers, while his wife Auguste was pushed under a train during transport. The others died of disease and exhaustion in various concentration camps or in transit. Otto Frank was the only person who survived Auschwitz.
Otto Frank returned to Amsterdam after the Liberation. Upon arrival he learned of his wife's and his daughters' deaths. The only thing that remained were Anne's diaries which weren't removed by the Nazis and were saved by one of Otto Frank's former employees. Upon reading his daughters diaries, Otto Frank was struck by the depth of her thoughts and enraptured by her emotions.
At last Anne's wish for her diary to be published was fulfilled. Entitled The Secret Annex, the diaries were published on June 25th, 1947. Otto Frank spent the rest of his life working for protection of human rights. He died in Switzerland in 1980. The identity of the Franks betrayer has never been established.
After the war the secret annex was seriously threatened. The building was condemned for demolition, however a group of people wishing to preserve the place protested. They set up the Anne Frank House Foundation, whose most important goal was to preserve the hiding place. Their goal was achieved, and today the museum is among the three most popular museums in Amsterdam.