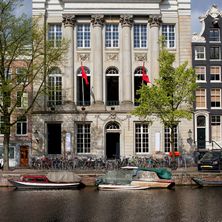 The building of the former art and science society Felix Meritis (from Latin - Felicitous through Merit), which was set up with the objective of promoting arts and sciences, is a typical monument to the Enlightenment, both on the inside and the outside. The classical temple façade with its colossal Corinthian pilasters and pediment is characteristic of the neoclassical style. The society's departments - visual arts and architecture, literature, trade, natural sciences and music - are symbolized in five relief sculptures. The interior includes original 18th century features such as a central staircase, an oval concert hall renowned for its acoustics, and the domed roof which used to house an observatory.
After the dissolution of the Felix Meritis Society in 1889, the building was purchased by Holdert and Co. Printers, who demolished most of the interior. Then a fire destroyed much of the façade in 1932. However, the building was restored, and after the war housed the Communist Party of the Netherlands, where the Communist newspaper - De Waarheid - rolled off the presses daily. During the turbulent 1960s, the building was turned into a cultural palace named Shaffytheater. It was a venue for performing arts that included experimental dance, mime, theatre and live music by such Dutch artists as Ramses Shaffy, Liesbeth List, Freek de Jonge and many other well and lesser known local and international personalities.
Since 1988 the Felix Meritis Foundation has continued these activities in a contemporary form becoming a European Centre for Arts and Sciences. Thanks to its rich cultural, political and social past as well as its spatial audience capacity, its unique architectural and acoustic qualities, the Felix Meritis building is an institution that plays a prominent role in the cultural life of Amsterdam. Open debates, talks and informal discussions, in spirit with the ideals of the Dutch Enlightenment in their broadest sense, also takes place within its walls. For many, Felix Meritis is still a haven for independent thinkers and a place where knowledge is exchanged and the arts appreciated. It maintains international links with The Red House in Sofia, Bulgaria, The Caucasus Foundation in Tbilisi, Georgia, the KulturKontakt in Vienna, Stiftung Zukunft in Berlin E and the Open Siberia Agency in Novosibirsk.