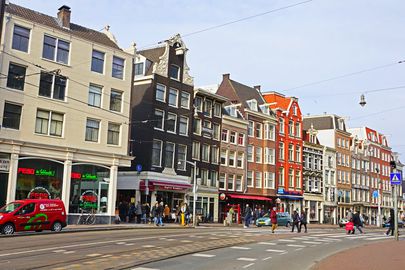 The invention of motored vehicles led to Amsterdam being quickly becoming unfit for the rise in road traffic late in the 19th century. Despite public protests, drastic measures that affected the look of the city had to be taken. One of such measures involved filling in over a dozen large Amsterdam canals and an even greater number of smaller ones.
The 20th century required even more space for cars and other road traffic. In 1901, fierce protests by the locals had rescued the famous Seven Bridges of the Reguliersgracht. However, in 1955, a local police commissioner still intended to submit a serious proposal to the City Council to solve all traffic problems by filling in all the canals and turn them into highways. He was almost tarred and feathered for such a proposal, but the fact of the matter is that almost half of the original waterways in Amsterdam were landfilled. A full 25 percent of the city’s surface still consists of navigable waterways totaling 65 km, thus still making Amsterdam the most ‘water-filled’ city worldwide.
The Martelaarsgracht is one striking example of such a filled-in canal in central Amsterdam. The street is an extension of the Nieuwezijdsvoorburgwal (also a filled-in canal) and, since being filled in 1884, became short if wide and busy street along open to traffic, including electric trams from 1906 onward. Elandsgracht, Palmgracht, Lindengracht, NieuwezijdsVoorburgwal and Rozengracht are a few of the other major canals that were also filled in.
The origin of the street name is debated. One of the legends states that the location could have been used as gallows, but this is not supported by evidence. According to the Amsterdam City Archives, a house may have stood on this spot that had on its gable a depiction of a martyr. An ancient source states there was once a building “where the martyr hung.”
The first Haarlemmerpoort (the gate to Haarlem which now stands at the end of the Haarlemerstraat) stood on the spot where the Martelaarsgracht and the Nieuwendijk cross. The IJ bank, now moved as far back as beyond the Central Station, around year 1400 must have been approximately where currently Martelaarsgrachthumbers 6 and 8 stand. When in early 15th century most of the IJ north of this area was drained, the canal was included within the city walls. The water flowed from the Damrak and the Nieuwezijds Achterburgwal through the Martelaarsgracht via the old Haarlemmer sluice into the IJ.
The Martyr Bridge straddled the two sides of the Nieuwendijk (now the pedestrian shopping zone). At the crossing with the PrinsHendrikkade (before 1879, TexelscheKade, named so after the North Sea island of Texel) used to stand the Spaarndammer drawbridge. Both of the above bridges disappeared after the canal was filled.
In 1928, many buildings along the Martelaarsgracht acquired the monument status. This did not prevent squatters from occupying some of the buildings in the 1980s and 1990s. The imposing building of the Royal Dutch Lloyd (now an art hotel) at the corner with the PrinsHendrikkade was built in 1917-1921 against the recommendation of the then active Committee for Wellbeing. The building on the opposite corner, whose cornice reads Kopje KoffieKarpershoek (Cup of Coffee Karpershoek) dates from as far back as 1629. This tavern is most likely to be the oldest surviving pub in Amsterdam, which was established in 17th century as an inn on the bank of the IJ for the purpose of stationing the sailors of the Dutch East India Company. Silica sand, used in the 17th century to cover floors of ‘brown pubs’, as such pubs are traditionally referred to, still covers the floors of this café.