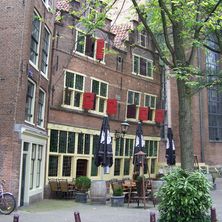 Originally Kattengat was a very narrow canal which joined the Nieuwezijds Achterburgwal (now Spuistraat) and the single via two separate waterways forking out in the form of a V. Unfortunately, in the second half of the 19th century this curious canal was filled in. On October 2 1873, the left side of the V acquired the name Koggestraat. Through further demolition, in 1936 the Kattengat was broadened.
The curious name of the street (literally translated as Cat Hole) may have referred to a narrow passage, a hole so narrow that only a cat could pass through it. Another possible explanation for this name is the marshy land where catnip used to grow.