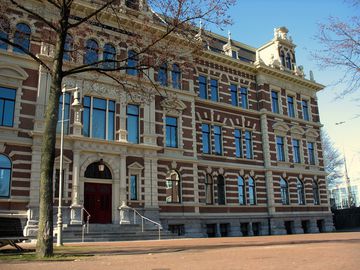 The origin of the name Droogbak, which literally translated means Dry Container, must have come about in the first half of the 17th century. It may have referred to this place as a possible location for drying cloth or sails. Droogbak was built in 1884 as a large, prestigious administrative office of the Holland Iron Railway Company. In 2001 the building acquired the status of a national monument.
Sumptuous freestanding buildings such as this one are singular in the Amsterdam cityscape. Constructed in red brick and a stone plinth on a square-shaped plan centered around an open (now glass- roofed) courtyard, this administrative building (currently occupied by Clifford Still and a other companies), the building features gables and bay windows, lavishly decorated with neo-Renaissance details such as columns, pilasters, pediments, obelisks, balustrades, oeil-de-boeufs and sculpture. In the past the building also housed the Dutch Architecture Institute, the Council on Labor and Government Administration and a part of the University of Amsterdam.
On the north side, there is a tower with weather vane. At the rear of the building, the ground level is higher than at the front. In this part of the entrance to the parking garage of the building. The architect responsible for designing Droogbak was PosthumusMeijes, who possibly worked in collaboration with one of the Central Station architects - Margadant.
In the 1970s the building was threatened to be demolished. The plans was to build a four-lane highway in its place. In 1978, however, the city council decided to cancel these plans. In 1999-2000 the building was restored, renovated and upgraded to become a modern office building. One of such upgrades involved building an underground garage.
As a result of the approximately 10-million euro renovation in 1999-2000, the stone facades have been cleaned and were re-painted as was customary at the end of the 19th century. Original pediments and ornaments were restored. Additionally, inside 10,000 m² of office space was created. The rooms on the outer sides, together with their historical stucco ceilings, carpentry and original fireplaces were left intact. Original murals came through the layers of paint and were restored too.
The finely carved in wood main staircase, the bay window in stained glass and all the wood carvings in the hall were brought to the original polish, as were the mosaics in the granite floors of the central hall, which were restored by hired especially for this purpose Italian experts. Above all, the formerly open courtyard was transformed into a covered atrium by a constructing a glass roof - an octagonal construction counting an area of 2500 m² and consisting of steel tension wires and laminated glass. Additionally, the renovating works spread from the building to the square, which was endowed with a fountain, new street benches and state-of-the-art street lighting.