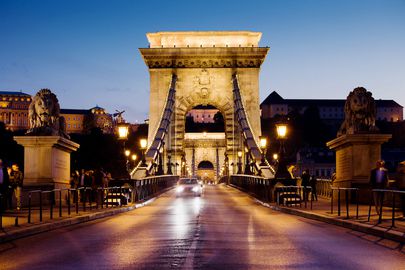 Perhaps one of the most iconic bridges in Europe, and certainly Budapest’s most famous landmark, the Chain Bridge was the first permanent stone bridge to connect Buda to Pest.
The bridge was commissioned by Count Istvan Szechenyi, a well-respected and much loved nobleman regarded as one of the greatest statesmen in Hungarian history. He vowed that he would build a permanent bridge following the death of his father. The story goes that on hearing of his father’s demise he needed to get to Vienna to see him but was stuck on the Pest side of the Danube for a few days due to the fact it was December and the pontoon bridge in place was unable to operate because of the floating ice on the river. There is another less sentimental and more racy version of events that says he simply had a mistress across the other side of the river.
Szechenyi himself had travelled extensively throughout Europe and was impressed with the modernisation taking place in Britain and also by the Canal du Midi in France. He began to think of ways to improve the navigation of the Danube and Tisza rivers in his own country. It was his lifelong passion to reform and promote the further development of his beloved Hungary. Unfortunately at the age of 68 he was to put a gun to his head and commit suicide following a stress related breakdown.
Szechenyi chose Englishman William Tierney Clark to design the bridge and a Scotsman by the name of Adam Clark to help build it. They were not related. Construction took place in the middle of 19th century and took ten years. Unfortunately most of the bridge was blown up by retreating German soldiers during the Second World War but it was rebuilt in 1949 in time for its 100th anniversary.
There is an urban myth about the lion statues that guard the Chain Bridge at both ends. It is said that they have no tongues. Legend has it that the sculptor who made them was mocked so much by this careless omission that he killed himself by throwing himself in the Danube. There is no evidence of this story, and apparently the lions do have tongues but this can only be seen from above.
When the bridge was first built, it was the suspension bridge with the second largest span in the world. The entire length of the bridge measures 375 metres and its width is more than 14 metres. There are pavements on each side where visitors can walk and enjoy spectacular views of the Parliament and the Danube.
Not surprisingly this iconic bridge has featured in several films such as the 2002 movie I Spy and of course music videos for pop stars like Katy Perry whose video for the song Firework features it at the start. Furthermore in 2001, a Hungarian stunt pilotflew his plane upside down under the bridge. This daring trick was so impressive that it is now a standard challenge in the Red Bull air races of today.
There is a plaque on the Pest side of the river which reads "To commemorate the only two surviving bridges designed by William Tierney Clark: The Szechenyi Chain Bridge over the Danube at Budapest and the suspension bridge over the Thames at Marlow, England."