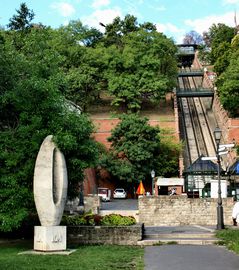 Named after the construction engineer responsible for building the Chain Bridge and designing the Buda Castle Tunnel at the Buda bridgehead, this square is situated at the terminus of the funicular railway which takes visitors up to the Castle District. Due to its convenient location it acts as a central hub for all visitors to the area and a focal point for them to start their different tours and excursions.
Its namesake, Adam Clark, was born in 1811 in Edinburgh, Scotland, and was eventually to settle down in Hungary and marry a local woman. The square was named after him as a mark of respect to his great contributions in both building and design inhis adopted city. But first the order of his name needed to be reversedin line with the Hungarian formatwhere the surname goes first and is then followed by the first name; hence you will notice that the official name of the square has been Hungarianised to Clark Adam Square.
At this bustling metropolis you can also find the country’s coat of arms on the castle wall next to the funicular, and the ’Zero Kilometre Stone’ nearby. This is a ‘zero shaped’ 3 metre high limestone sculpture which is the official starting point for Hungary’s road network and the place where distances away from Budapest are traditionally measured. The eye catching sculpture is the work of MiklósBorsos.
The funicular railway was first opened in 1870 and still operates to this day. It only takes approximately 3 minutes and is a fun way to get up to Castle Hill, the other way if you are feeling more energetic is to walk. The view from the funicular offers stunning panoramic views, but if it is views alone you are after you are probably better off simply using the two walkways which run across the funicular. The two carriages of the funicular are affectionately named Margit (after the nearby island that bears its name) and Gellért (again the namesake of a nearby famous landmark) and are connected like counterbalancing weights: so that while one carriage is literally pulled slowly uphill, the other travels at exactly the same speed downhill.
The Buda Castle Tunnel was built for the same reason most tunnels are built; to quicken the journey for those who would otherwise have to go around or over the hill to get to the other side. Since the middle of 19th century the 350 metre long bridge has connected Adam Clark Square to Krisztina Town. Because of its length and position it has long been a local joke told to children that the Buda Castle Tunnel is where the Chain Bridge is stored to keep it dry when it rains. Although the tunnel is open to cars, you can also walk through it, though it is not recommended due to the high concentration of motor fumes.
As Adam Clark Square is nicely situated at the Buda end of the iconic Chain Bridge it is not only a great focal meeting point to start your tour of the Castle District, but also presents the perfect opportunity to take a photo of the famous lion statues which guard the bridge. It is also a good place to stock up on refreshments either before or after your tour of the Castle District.