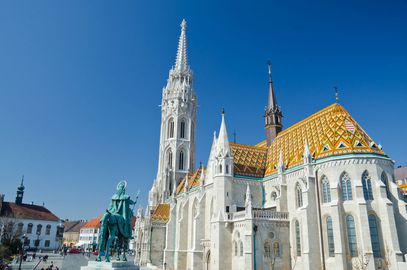 Standing majestically in front of the Fisherman’s Bastion on Castle Hill,this famous and sacred landmark with its rococo spire and stunning colourful Zsolnay manufactured diamond patterned ceramic roof tiles, bears the name of one of Hungary’s most popular and beloved kings; Matthias.
King Matthias, who rulled the country in 15th century, established a professional army - the Black Army of Hungary, reformed the administration of justice, reduced the power of the barons, and promoted the careers of talented individuals chosen for their abilities rather than their social statuses. Matthias patronized art and science, his royal library, the Bibliotheca Corviniana, was one of the largest collections of books in Europe. With his patronage, Hungary became the first country to embrace the Renaissance from Italy. As Matthias the Just, the monarch who wandered among his subjects in disguise, he remains a popular hero of Hungarian folk tales.
The dramatic spectacle of Matthias Church is certainly a magnificent eye pleasing sight as it towers over the Danube in its fabulous location perched high upon Castle Hill.
The official name of this important church, which has born witness to many coronations and historical events, is in fact, ‘Church of Our Lady’ and was originally the community parish church for Buda’s German community. It became known as Matthias Church after its namesake, King Matthias, held two of his weddings here. The first was to Catherine of Poděbrady who was just 13 years old. Matthias was 18 at the time and it had been agreed by her father, George of Poděbrady the then ruler of Bohemia, that Matthias would also be King of Bohemia if he agreed to marry Catherine who had been promised to him since she was 9.
Unfortunately, Catherine was to die in childbirth at the tragically young age of just 14. The King went on to marry Beatrice of Naples and they also had their wedding conducted here. An interesting and unusual fact about Beatrice is that she was actually made Queen of Hungary twice. First as a result of her marriage to Matthias, and secondly after his death. She managed to continue as Queen of Hungary by marriage to the next King; Vladislaus II, such were the complex power brokering deals for the coveted crown and rule over the Kingdom of Hungary at the time.
Built in the mid-thirteenthcentury after the Mongol invasion the church as it now stands is an eclectic mix of many styles ranging from Gothic to Baroque and several in between. This is testament to its rich history as a place of worship and ritual – which incidentally has not always been to a solely Christian God.
During the Turkish occupation which lasted 150 years the elaborately painted walls were whitewashed and furnishings changed in line with the requirements of the Islamic faith. Throughoutthis time the castle served as the city’s principal mosque.
Interestingly, the interior of the church includes the stunning Loreto Chapel which houses a statue of the Virgin Mary and infant Christ which was made in 1515. During the time that Budapest was under Turkish Occupation, locals cunningly hid the statue by plastering over the niche that contained it. The statue was never noticed by the Ottomans despite using the church as their place of worship. It was not until over a century later that a gunpowder explosion revealed the hidden statue.
After the Turkish Occupation unfortunately the building was left to go to ruin until the 1700’s when it was once again restored to a catholic church. It was at this time that it received yet another significant facelift and transformation in both style and décor. This time it was the Baroque style that dominated. The exterior Neo-Gothic style was only added in the late 1890’s.
The interior of the church includes works by famous nineteenthcentury Hungarian painters KárolyLotz and BertalanSzékely among others. Also to be found in the church is the tomb of St Imre, who was the son of King Stephan (Hungary’s first Christian King) and heir to the throne. Unfortunately, he was killed in a boar hunting accident at the young age of 19.
Among the churches many notable events include the coronation of the last two Habsburg Kings, Franz Joseph and Charles 4th. When Franz Joseph and his wife Elizabeth were crowned here in 1867 it was especially significant as it established the Austro-Hungarian Empire. To celebrate the occasion, Hungary’s most famous composer Franz Liszt, to whom Budapest airport is named after, performed his famous ‘Coronation Mass’.
Even today the church is more than a simple place of worship. Although still very much in use as a functioning church it also houses the Museum of Ecclesiastical Art in an upstairs gallery and includes not only various important religious artworks but also houses a replica of the Crown of St Stephen - the Hungarian Crown - in its crypt.
The Holy Crown of Hungary, also known as the Crown of Saint Stephen, was the coronation crown used by the Kingdom of Hungary for most of its existence. Kings have been crowned with it since the twelfth century. No king of Hungary was regarded as having been truly legitimate without being crowned with it. In the history of Hungary, more than fifty kings were crowned with it, up to the last, Charles 4th, in 1916.
The weight of the Crown is more than 2 kilograms. It has an ellipticshape and is larger than a normal human head. During coronations, the king had to wear a leather 'kapa' liner, made to fit, inside the crown.
Since 2000, the original Holy Crown has been on display in the central Domed Hall of the Hungarian Parliament Building.