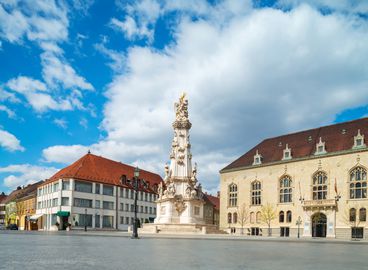 You cannot get much more central than Trinity Square in the Castle District. It is the place where some of the most famous landmarks are located, or at the very least can be easily viewed from, which is why it is also one of the most popular places to visit in the whole of the Castle District. As well as the magnificent Matthias Church (also known as the Coronation Church), the square also boasts the former Town Hall, the Statue of St. Stephen, Fisherman’s Bastion and the old Ministry of Finance building.
In addition to once being the location of the old Ministry of Finance Department, this remarkable building was also at one time the dormitory for students at the Technical University, and at yet another point was home to the House of Hungarian Wine. Nowadays its current incarnation is as a place to promote Hungary and its long and vibrant culture. As such it regularly holds native themed events and exhibitions.
At the very centre of Trinity Square is the 14 metre high Holy Trinity Column. It was erected in memory of the victims of the plaque which broke out after Rakoczi’s War of Independence in 18th century against Habsburg rule. At the top of the statue is the Holy Trinity, below are statues of angels and then below them larger statues of various saints.
The statue of St. Stephen is another very popular and centrally located statue which greets you as you walk toward Fisherman’s Bastion. St Stephen was the first King of Hungary and the last Grand Prince of the Hungarians. He was the first member of his family to become a devout Christian and to this day his feast day, 20th August, is celebrated each year with a public holiday and day long celebrations usually ending with a firework display. His birth name was in fact Vajk, a pagan name. The mummified hand of St Stephen is part of the Holy Right Hand procession which also takes part on the 20th August each year. The Holy Right Hand is housed in St Stephen’s Basilica.
You will also note that on Matthias Church and various other buildings and monuments in the City you can see a raven with a gold ring in its mouth. This bird with a ring motif features prominently on the coat of arms and crest of the noble Corvinus family.
There are many legends about this bird. The main one is that when Matthias was called upon to become King of Hungary he was at court in Prague. His mother sent a raven with a ring in its beak to let him know of his royal appointment. The raven flew non-stop to Prague and from this legend the family’s name was also changed to the Latin for raven ‘corvinus’.
Another legend suggests that Matthias’s father,John Hunyadi, was the illegitimate son of Sigismund, King of Hungary. At his birth, Hunyadi was given a golden ring by his mother (who had once had a romantic liaison with Sigismund and who had provided her with the ring in the first place). The purpose of the ring was to enable him to be later on recognised as a legitimate King. One day while Hunyadi was a child in his cot, a raven swooped down and stole the ring from his finger; thus marking Hunyadi out as a direct descendent of the King. In one version of this story the bird was shot down by an archer and the ring reclaimed. In truth it is most likely that this imaginative story was introduced to provide Matthias with further claim to the Hungarian crown, not that he needed it in the end, as he was to become one of the greatest and most loved Kings of Hungary in history, as nicely illustrated by his affectionate epithet; Matthias Rex the Just.