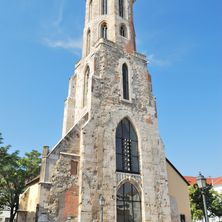 The strange lonely medieval Gothic tower that stoically stands aloof in the skyline behind Matthias Church is the Tower of the Church of Mary Magdalene. This stark structure bears witness to some of the darker episodes of Budapest’s long and tumultuous history. It is perhaps a structure that more than any other on Buda Castle Hill, tells the story of Hungary from before the Ottoman occupation right through to modern day times.
Today the Tower is all that remains of a Gothic 13th Century Franciscan Church that was called the KapisztránTemplom. It was originally named after Saint John of Caspistrano, the ’Solider Priest’ who at the age of 70 led a battle during the 1456 Siege of Belgrade against the invading Ottomans along with John Hunyadi, the leading Hungarian military commander of the time.
Although they survived the battle, in the aftermath both Hunyadi and Caspistrano were to fall prey to the bubonic plaque that swept through their camp as a result of the filthy unhygienic conditions typical of brutal medieval warfare, and perished soon after the bloody siege.
The Pope in office at the time of the siege, Callixtus the 3rd, had called for Christians to pray for the defenders of the city by ordering European church bells to be rung each day at noon. Following the victory he never rescinded this order, and it is alleged that is why the tradition of the noon bell remains among both Protestant and Catholic congregations to this very day.
This significant victory was to stop the Ottomans from advancing any further toward Christian Europe for another 70 years.
Unsurprisingly Hunyadi’s pivotal role in the siege made him hugely popular and almost certainly worked in his son’s favour, Matthias Corvinus, when he was subsequently elected King of Hungary.
So, you can see now how the history of Hungary is intrinsically weaved into the fate of this battered old tower.
Ironically, when the Ottomans did eventually take over the city from the mid-1500s, this church was the only one to remain an active Christian church within the Castle until the end of the sixteenthcentury, rather than being immediately converted into a mosque like the nearby Matthias Church. However, eventually it was converted to a mosque but once the Ottomans had left, it was quickly restored to its original faith.
The Franciscans finally got their church back once a monastery was built in the area and rebuilt it in the Baroque style typical of the time.
Unfortunately the church was heavily damaged during the World War Second and was almost completely destroyed during the communist times although it could have been saved. It was never to be rebuilt and now all that remains is Magdalene Tower which stands as a memorial not only to the war, but also to serve as a reminder of the cultural destruction carried out during the communist era.
But poignantly the tower’s bells still toll at noon.