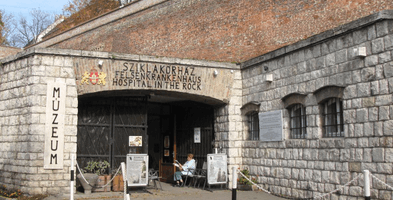 This is certainly a different type of tourist attraction than the type you would normally expect to find in the historic Buda Castle District, especially one located in the hill’s vast natural subterranean cave system. But nevertheless, the Hospital in the Rock really is one of the city's major attractions. The former hospital and nuclear bunker is now a fascinating popular museum buried deep under Buda Castle Hill and is definitely worth a visit. And that’s before you get to hear the stories of the heroic doctors, nurses and volunteer workers who all laboured steadfastly here, sometimes under extremely frantic and harrowing conditions.
Like something out of a James Bond movie the caverns were first set up in the 1930’s in preparation for the Second World War and initially acted as an air raid alarm centre before it was turned into an emergency hospital.
The first place to become fully operational was known as Air Raid Alarm Centre ’K’; this was the site from which all the air raid sirens were controlled. To this original location a first aid post was then added and, to keep costs down to a bare minimum, the Hospital in The Rock was developed using the existing tunnel network (paradoxically part of which had allegedly once actually served as the castle’s grim dungeons).
By 20th February 1944 the Hospital in the Rock was finally opened and fully operational. It had three wards and one operating theatre. The hospital was used extensively in 1944-45 during the Siege of Budapest and took in both civilian and soldier casualties. Unfortunately during this period the mortality rate was high due to overcrowding and infection coupled with a chronic shortage of medical supplies.
However, one saving grace for the hospital was that it had its own generators; so it always had its own independent electricity supply to power lighting as well as vital medical and diagnostic equipment such as X-rays machines.
The hospital not only helped save the lives of the ill and injured, but also the persecuted. During the Second World War it secretly employed eight Jewish doctors who were given Hungarian military uniforms so they would not be detected. Unfortunately in November 1944 two of the doctors were caught. One was sent to a concentration camp and the other brutally executed on the bank of the Danube.
After the war the hospital became a top secret institute for producing a much needed typhus vaccine which had become rampant after World War II.
During the 1956 Hungarian uprising against Soviet rule, once again the hospital came to the rescue of its people. The head doctor at the time was Dr András Máthé. Legend has it that he wore a necklace around his neck with a bullet attached to it which he had removed from the head of an injured patient, who as it happens had survived the surgery! It is said that he forbade any amputations whatsoever, and was something of a miracle worker. Incredibly the hospital also served as a maternity ward during the revolution where six baby boys and a girl were born. Shortly after the unsuccessful revolution the hospital was closed down in December 1956.
During 1958-62 the Hospital in the Rock once again found itself with a new role.This time it was converted into a nuclear bunker as a result of the perceived threat of a nuclear attack from the west during the tensest period of the Cold War, and from 1962 to 2007 it also acted as a Civil Defence Store.
Today it survives as a museum. The layout is preserved just as it was during its active time serving the inhabitants of Budapest through some of the most tumultuous and difficult times of the late 20th century.