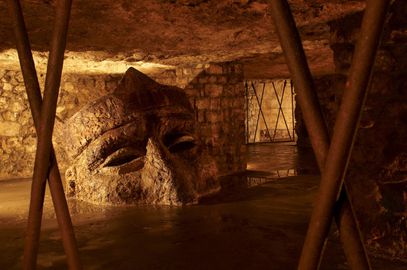 The underground labyrinth of complex caves and cellars which span the hidden depths of the Buda Castle District are also part of the UNESCO World Heritage site, and with very good reason.
The caves were originally formed millions of years ago as a result of the numerous hot water springs existing deep inside the mountain which over time eroded the rock away and created a substantial cave complex. Archaeologists have even found evidence of Stone Age dwellers which signifies that these caverns have been used by humans for many thousands of years, even as far back as the Stone Age period.
Other functions of the caves have included them being used as wine cellars, medieval torture chambers, a dungeon, a bomb shelter and even as a treasury to name but a few of its different roles.
During the eleventhand twelfthcentury, local residents used the caves for their water source and houses were built in line with the caves wells. When Buda became a Royal city the caves were used for storage, and not just for cooling the wine but also for other valuable commodities, such as perishable goods and of course, in a time before easily available refrigeration, food. Residents above carved out passageways and used the surplus stone for their own buildings. So in a very real way the underground caves truly provided valuable resources to the residents above, and not just from the obviously hugely important life-giving mineral water.
During the fifteenth century the cave system was used to store ammunition and supplies in the wake of the serious Turkish invasion threat facingthe country, and once this threat became a reality and the Turks invaded and occupied, they too used the caves for the very same purpose.
It is well documented that the caves have been used as a place of refuge during times of war and internal strife but unsurprisingly there are also abundant myths and legends that surround this complex subterranean network. For example, there are grim stories such as the one about the Pasha of Buda, during the Ottoman occupation, sealing alive the women with whom he had grown bored of in remote parts of the cave system where they were never to be seen again, and of course there are innumerable tales of ghosts and evil spirits.
Over time the caves were mostly forgotten, it wasn’t until the rapid development of Buda that they were rediscovered, mainly due to the fact that streets and buildings above were experiencing structural damage due to the caves below. So the caves were filled in with debris and remained undiscovered again until the 1930's.
At this point in time some parts of the caves were first opened up to the public, and following this a permanent exhibition was started which resulted in more caves being opened and eventually a circular path was formed.
During the World War Second the caves were used as a shelter for both Germans and Hungarians and it was at this time that the Hospital in the Rock was established.
To give you some idea of the size of the labyrinth it was big enough to accommodate up to 10,000 people during wartime.
In more modern times the labyrinth has had many exhibitions and tours and at one point it was regarded as one of the 7 Underground Wonders of the World and even had a fountain of red wine in the centre. However, this was closed after one too many visitors perhaps imbibed more than they could manage.
The popular and expansive exhibitions and tours of the ’Labyrinth of Buda Castle’ which was open to visitors during the years 1984 through to 2011 are no longer running but the 1000 metre long labyrinth is still currently open and a big hit with tourists. Nowadays its main attraction is the story of one of King Matthias’s most famous captives who was imprisoned here during the 15th century; Vlad the Impaler, better known to the rest of the world as the inspiration behind Count Dracula. Other exhibits include stone monuments, a cave exhibition and wax work figures.