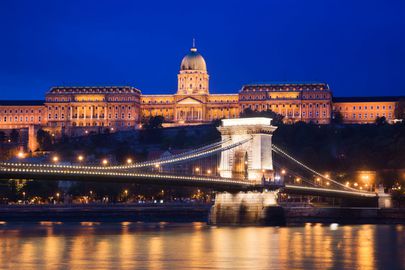 One wouldn’t expect the history of the Buda Royal Palace to be anything other than a microcosm accurately reflecting the turbulent history of the Kingdom of Hungary that it once so regally and proudly presided over.
In tune with the country’s history, along with the larger than life characters of the people who resided here; the Royal Palace has been besieged, destroyed, rebuilt, relocated and refashioned on many an occasion.
The first castle ever built in what is now known as the Castle District was during the thirteenth century by King Bela IV who ordered a defensive wall to be constructed around the hill. Sadly, it was completely destroyed long ago, and today there are no visible traces left of it whatsoever. In fact nobody actually knows for sure where the structure even originally stood.
The foundations of today’s Royal Palace were constructed in the fourteenthcentury by King Lajos the Great and was built in the Romanesque style typical of the period. The next notable change occurred some 40 years later when Sigismund of Luxembourg, replaced it with the new Gothic style that was just beginning to emerge throughout Europe.
It wasn’t until the popular King Matthias Corvinus came along in the fifteenthcentury that a new, larger palace was built, this time in the Renaissance style. The new king decided that the palace built by Sigismund was too small and lacked the appropriate grandeur. It was at this time that the garden also started to be developed.
Unfortunately, after the Ottoman occupation and the ‘recapture’ of the city in the great siege of 1686, the castle district and the palace was left in ruins. It wasn’t until the Habsburgs were in power that another newer but smaller palace was eventually constructed on the site in the middle if 18th century.
This time the palace was built in a Baroque style and later on was further extended during the reign of Empress Maria Theresa, the then Queen of Hungary. Incredibly she only actually ever visited the palace twice and it was only on hersecond visit that she used it as her living quarters.
Following the Austro-Hungarian Compromise of 1867, which formed the Austro-Hungarian Empire, the Habsburg Palace was rebuilt and this time with the trademark Baroque Dome. Although it should be pointed out that during this time the palaces function was mostly as a symbolic reflection of the crown as no monarch had actually permanently resided here for some considerable time.
But although the ruling monarchs of the time no longer elected to live here, their absence provided the ideal opportunity for other notables to set up residence in their place. In fact up until 1944 one of its most famous residents was Miklós Horthy, governor of Hungary until he was forcibly removed by German troops.
During this era the palace was to once more suffer serious damage, this time during the Siege of Budapest as it had become the German military headquarters.
Once again the palace was reconstructed in 1950, this time by architect IstvánJanáki. During the building work the ruins of the fifteenthcentury palace were discovered and therefore incorporated into the new build. It was at this time that the dome was also replaced with a more classical version.
Today’s Palace interior is not as lavish as its many previous incarnations, but even so, it is still an impressive sight to behold and one can easily imagine the opulence and grandeur of its formativedays.
The Palace is now divided into several wings (marked from A to F) which are located around the famous Lion Courtyard. It currently houses the National Library, the National Gallery, and the Budapest History Museum.