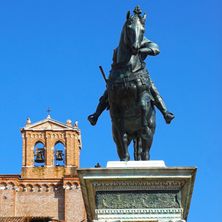 Andrea del Verrocchio's tribute to one of Venice's greatest soldiers of fortune, Bartolomeo Colleoni, happens to be one of the most famous equestrian statues in the history of Italian sculpture. The monument's historical background is just as fascinating as the work itself. In fact, poor Colleoni is turning over in his grave now, for he surely had never imagined that he would be betrayed in this manner; and not by the enemy, but by his employer - the Venetian Republic.
Bartolomeo Colleoni was born in 1400 in the countryside of Bergamo, which was then part of the Duchy of Milan. He descended from a noble family, which was exiled from the duchy for having taken sides with the Guelphs, the supporters of the Pope. After his father was assassinated, young Bartolomeo entered the service of several condottieri - the formal term for soldier of fortune - and fought just about everywhere on the Italian peninsula. Finally, he sided with the Venetians, who had been waging a vicious war against the Duke of Milan, Filippo Maria Visconti. Colleoni was able to conquer some important cities for the Republic, such as Verona and Brescia. But when Venice and Milan signed a peace treaty in 1441, Colleoni went over to the Milanese side, only to be suspected and imprisoned. After being released by the new ruler of Milan, Francesco Sforza, Colleoni returned to serve Venice. However, not obtaining the most prestigious Venetian military title of Captain General, Colleoni again switched sides and came back to Sforza. It was then, in 1455, that the Venetian government, realizing how desperate it was for Colleoni's skill and knowledge of the north Italian terrain, offered him the title of Captain General in return for his unconditional, lifelong service to the republic.
Colleoni remained loyal to Venice for the rest of his life, however, he fought more for himself than for Venice. When he was not fighting he performed a lot of charitable work and made significant agricultural improvements on the lands he was endowed with. He was considered an honest and dignified soldier, never having betrayed any of his employers and never having subjected his conquered territories to pillage. That is why his daughters had good reason to be furious when in 1479 the Venetian government erected his monument not on St. Mark's Square, as had been requested in his will, but in its current location.
In his will Colleoni had stated that he would leave a great part of his estate to the Venetian Republic in return for an equestrian statue dedicated to him on St. Mark's Square. In 1479 the Venetian government happily accepted the conditions of the will. But when it came time to build the statue, it was wistfully observed that, according to law, no statue could be erected on St. Mark's Square. So, the Venetians devised the notion that what Colleoni had really wanted was to be honored next to St. Mark, not necessarily on the main piazza. Consequently, they determined that standing next to the Scuola San Marco, the guild devoted to Venice's patron saint, would be just as prestigious.
Three sculptors participated in the project's competition: Bartolomeo Vellano, Alessandro Leopardi and Andrea Verrocchio. The first two sculptors made their models out of wood, leather and clay, while Verrocchio created a wax model, which gave the commissioners a better idea of the intended sculpture. Verrocchio was given the contract in 1483, but five years later, as he was casting the final model in bronze, he died. Leopardi finished the statue and built the pedestal, on which it was placed.
Today the equestrian statue attracts a lot of admiration and truly conveys the energy, dynamism and power that Colleoni possessed. One element, however, betrays his might and superiority: his name. In Italian the word "colleoni" can be deciphered as "col" - "leoni," one who sides with the lions, that is, the Venetians, whose symbol is the Lion of St. Mark. But the surname also sounds a lot like the Italian word "Coglione," with a soft L, which is slang for testicle. In fact, according to legend, Bartolomeo Colleoni was endowed not only with military genius, but also with three testicles. Legend or not, on his coat of arms we can see three spherical details.