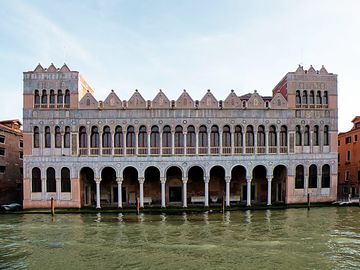 The exotic palace on the other side of the Grand Canal, which today houses the Museum of Natural History, was between the 17th and 19th centuries an inn for Turkish merchants. It was originally built in the XIII century in byzantine style. In 1438, when the penultimate Eastern Roman Emperor, John VIII Palaiologos, made his historic visit to Venice, he was hosted in the palace. By the time Venice and the Veneto joined the new Italian Kingdom in 1866, the Fontego had deteriorated beyond recognition. In 1870 a restoration project was carried out by architect Federico Berchet, who tried to be as faithful as possible to the original structure. He maintained the ten arcs on the ground floor, as well as the eighteen-arc loggia on the second floor. He also added the two towers on the sides of the building and the merlons on top of the façade. Not everyone in Venice was thrilled with Berchet's work, however. Most people actually considered the new palace awkward, even bordering on the ridiculous.
Venice's relations with Turkey, or what was then known as the Ottoman Empire, the biggest at the time, were always very tense and unpredictable. The Venetian Republic was the empire's largest European trading partner, but it was also the main competitor for supremacy in the Eastern Mediterranean Sea. In fact, as the Ottoman Empire gradually expanded West, it was precisely the Venetian islands around Greece that were one by one incorporated into its territory. Starting in the 15th century, when the Ottomans conquered Constantinople, the two nations fought wars on an average of every fifty years. Their last war was in the beginning of the 18th century, after which the Ottomans acquired Venice's territories in the Dalmatia, dramatically reducing Venice's influence in international affairs.
Nevertheless, Venice, being a very pragmatic state, knew that its economy depended on trade with the East, and therefore wished to accommodate the Ottoman, as well as other Muslim merchants, coming to the lagoon. Giving these foreigners their own quarters was also a way to maintain their safety during critical times and make sure that their ideas did not spread too far into town. Who says you can't do business with your enemy?