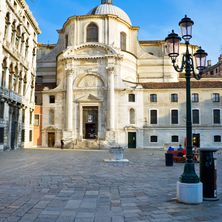 Although this church is dedicated to Jeremiah, a Christian martyr from Muslim dominated 9th century Spain, its main attraction is the remains of St. Lucy, who maintains one of the biggest cults in Catholicism.
The first church to stand on this site was built in the 11th century and was known to have sheltered the relics of St. Magnus of Oderzo, who had fled the mainland from the Longobards. In the end of the 13th century Doge Sebastiano Ziani, one of the Republic's greatest urban planners, after having divided Venice into several districts, replaced the original church with a more practical one. He also had the present belfry erected. The church that we see now was built in 1753 by Carlo Corbellini and the façade that looks out onto the square, as well as the one facing the Grand Canal, was added only in 1871.
The interior is very plain but bright and spacious, with a high vaulted ceiling and a checkered stone floor. It is one of the few Venetian churches to have a Greek cross layout. Of particular interest are the two statues standing on the main altar, St. Peter and St. Jeremy, sculpted by Giovanni Ferrari, as well as a painting by Palma the Younger, "The Virgin at the Coronation of Venice by St. Magnus," located by the fourth altar.
Yet, regardless of its unimposing appearance, every 13th of December the Church of San Yeremiah becomes an object of pilgrimage for Catholics from all over the world. They all come to venerate the patron saint of the blind, St. Lucy.
Lucy was born in a wealthy family in Syracuse, Sicily about the year 280, during a time when Christianity was quickly, though secretly, spreading throughout the Roman Empire. At a young age she decided to devote her life to Christ and distribute her widowed mother's wealth to the poor. Though her mother wanted her to marry into an influential family, Lucy insisted that she would only be the bride of Christ. When her mother fell ill with a bleeding disorder, Lucy had a vision of St. Agatha of Catania who assuaged her that because of her unwavering faith her mother would recover from the illness. The mother recovered and began giving away her possessions to the needy. It was then that Lucy's betrothed found out about her Christian faith and informed the governor of Syracuse. The governor ordered Lucy to burn a sacrifice to the emperor's image. When she refused, he sentenced her to be deflowered in a brothel. But when the guards came to take her away, they could not move her, so adamant did she become. Then they tried to burn her at the stake, but the fire would not burn. Finally, she was executed with a sword. However, before she was beheaded, her eyes were gouged. The tradition also says that when her body was being prepared for burial, her eyes were miraculously restored.
Her cult spread fast: by the 7th century she was already being revered in England. Her relics did not stay in one place for long either. About four hundred years after her martyrdom the Duke of Spoleto conquered Sicily and transferred Lucy's remains to the present-day Italian region of Abruzzo. From there, Holy Roman Emperor Otto the Great moved them to the town of Metz, in northeast France. Later, one of the saint's arms was taken to Germany. Then, to escape the Sarecens the body was taken to Constantinople, from where Venetian Doge Enrico Dandolo transported it to Venice after the Fourth Crusade in 1204. In the 16th century the Venetians gave Lucy's head to King Louis 12th of France, who deposited it in the Cathedral of Bourges. The rest of the relics were placed in the Church of Santa Lucia in Venice. Unfortunately, when the Venetian authorities decided to build the railway station in 1861, the Church of Santa Lucia was demolished and the relics were transferred to the church of San Yeremiah.
But the story does not end here. In November 1981 thieves broke into the Church of San Yeremiah, at gunpoint stole the remains and asked for a ransom. The ransom was never given, however the relics were recovered by the police exactly on St. Lucy's feast day, December 13. The saint's body went through more agony after her death than during her lifetime. Good thing she didn't see it all.